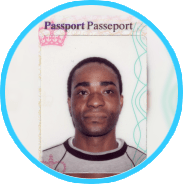 My name is Usman Mybaby, I was born in January 1961, the same year as the Late Princess of Wales Princess Diana. I am the son of an Immigrant called Mr Musa Ibn-Ibrahim. My parents emigrated to the UK in 1960. I was the first child born to my Dad when he came to England.

In 1979 I became a Professional Writer at the Age of 18. I have lived in Africa for a number of years which gave me a good idea of life in other parts of the world, especially in Africa. I finally came back to London, England at the age of 21 in 1982. I have since then lived in London, England continuously.

Between late 1982 and 1983, I was writing letters to Her Majesty The Queen, and sending her some of my stories. I was later to discover that William Shakespeare was also a friend of Royalty, Shakespeare is my favourite writer and a kind of mentor if you want to put it that way. My parents are also from a Royal Family in Africa, which in a way explained my closeness to Royalty.

However, the fact that I wrote a number of letters to Her Majesty was not particularly easy, because she did not reply and my letters and stories were not returned. I became worried, because my letters to Her Majesty were very friendly and supportive to her and her family. It became more frequent, however, there was still no reply. I was beginning to have some rather strange dreams of Her Majesty saying that she was waiting for her father King George VI. However, it made me think, does she think I am her late father or what? As a Writer I don’t think too much of that, however, this is the Queen I can not just ignored. I wrote her again, this time I told her that I believe in REINCARNATIONS and that I am probably the Reincarnation of her late father, but I am a completely new person. This period was important for the Monarchy, as it was the period that Lady Thatcher was the Prime Minister and she particularly wanted to know what was going on. I chose Her Majesty and regardless of her not replying my letters I never changed my choice. I knew quite clearly that Her Majesty will eventually reply, but it was seriously getting on my nerves. Considering that I am a writer, I have quite a lot of things to think about.

In 1983 or 1984, I decided to change my plans and I sent the late Princess Diana a Birthday Card, in it I scribed a little message in it, like, “I was born in January 1961, the same year as you Diana, isn’t that wonderful”?
To my absolute amazement the Lovely Princess replied immediately, to thank me. It was actually my father who brought the letter to me, since I used a different address from the family home in London where I live. I was slightly disappointed when I opened the letter, because, I was expecting a letter from Her Majesty, and this one from Diana was really a surprise. That was how our relationship developed and lasted to 1997 as a result of her untimely death.

Her Majesty did eventually, wrote me a number of letters, some of which you can see in other pages called LETTER AUCTION.

What our clients say about us

This is the Harry Harry Potter for grown-ups 'Storytelling'.

USMAN ABRAHAMS refers to as “the gentleman of my choice”, he sounds cheerful and relaxed.

Our Hero MR MYBABY is The King of Hearts, The King in People's Hearts.

MR MYBABY's Stories made people less fearful of GOD, People now see GOD like a Friend, because of His work.